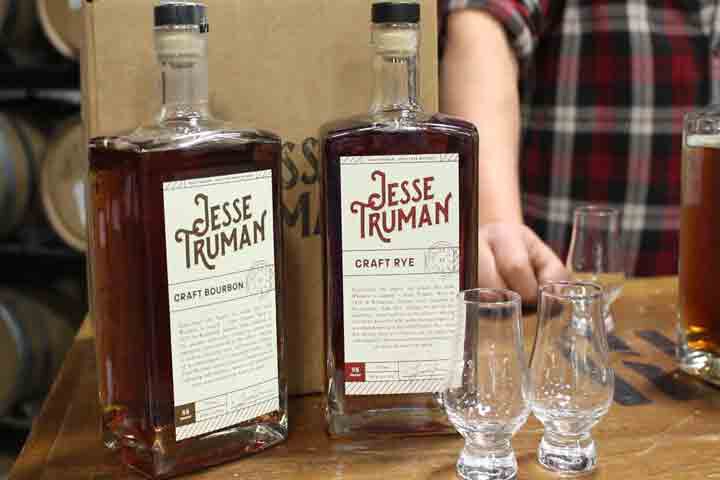 Hello everybody, and welcome to our newest blog entry! Bourbons are a hot commodity in the Midwest; there are just so many choices out there. Gone are the days where all that existed were you’re grandfather’s Jim Beams and Jack Daniels of the world. Just like the big boom in craft beer recently, bourbons have just exploded into the market.

Three Rivers Distilling approached us last year with an opportunity to create a bourbon to call our own. After much deliberation, our company owner decided name our new product line “Jesse Truman” after his grandfather. Jesse Truman, was born in 1875 in Richmond, Indiana. Though he died at an early age, Jesse lived life to the fullest – sharing it with his beautiful wife and making a name for himself as an accomplished farmer. He bread hogs and draft horses.

Three Rivers Distilling hooked us up with MGP down in Lawerenceburg, IN to source the juice that would later be filled at Three Rivers’ Distillery. Using an accelerated aging process, we were able to have a 6 year old whiskey in just a few  months. The first two spirits to be sold under the Jesse Truman product name were the un-aged 90 proof Corn Whiskey and a 94 proof bourbon.

At the same time of the original release, Three Rivers got to work on two brand new mash bills that would be crafted and distilled on site. The Craft Bourbon is 78% corn, 10% barley and 13% Rye. The Craft Rye is 95% Rye, 5% barley. All ingredients were sourced locally from companies in the Fort Wayne area as were the barrels.

In the next few weeks, you will be able to enjoy our new Jesse Truman Craft Bourbon, Craft Rye, and our Craft Single Barrel Rye (extremely limited supply).